Salvador Dali Cranes mous et harpe cranienne (Limp Cranes and “Cranian” Harp) 1935 is intaglio. Roger Lacourière printed the etching. The total tirage is unknown. The MoMA web-site gives as much information available regarding this intaglio as anywhere. The image size is 14 1/4 x 11 15/16.” Plus, the sheet size is 23 x 16 3/8.” This is a very small edition. This etching appears to be a proof. It is printed on an unwatermarked paper. The paper itself has printer’s creases. It is unevenly trimmed. It has printer’s smudges in the margins and a few in the image. There is little burr, but raised lines can be felt on the image.  There is an unidentified collector’s stamp in the lower right corner.  Plus, the etching is signed and dated in blue crayon.

Michler and Lopsinger catalogue the etching as #56. Field does not include the etching in the current catalogue. However, there are indications that it will be included in the revised catalogue. Michler and Lopsinger indicate only a few impressions are known. Most of these are unsigned and auction catalogues indicate that some of these were printed after 1935.  Thus, there is a need to show whether this is an authentic work by Dali (see below).

Call us for more information. Available 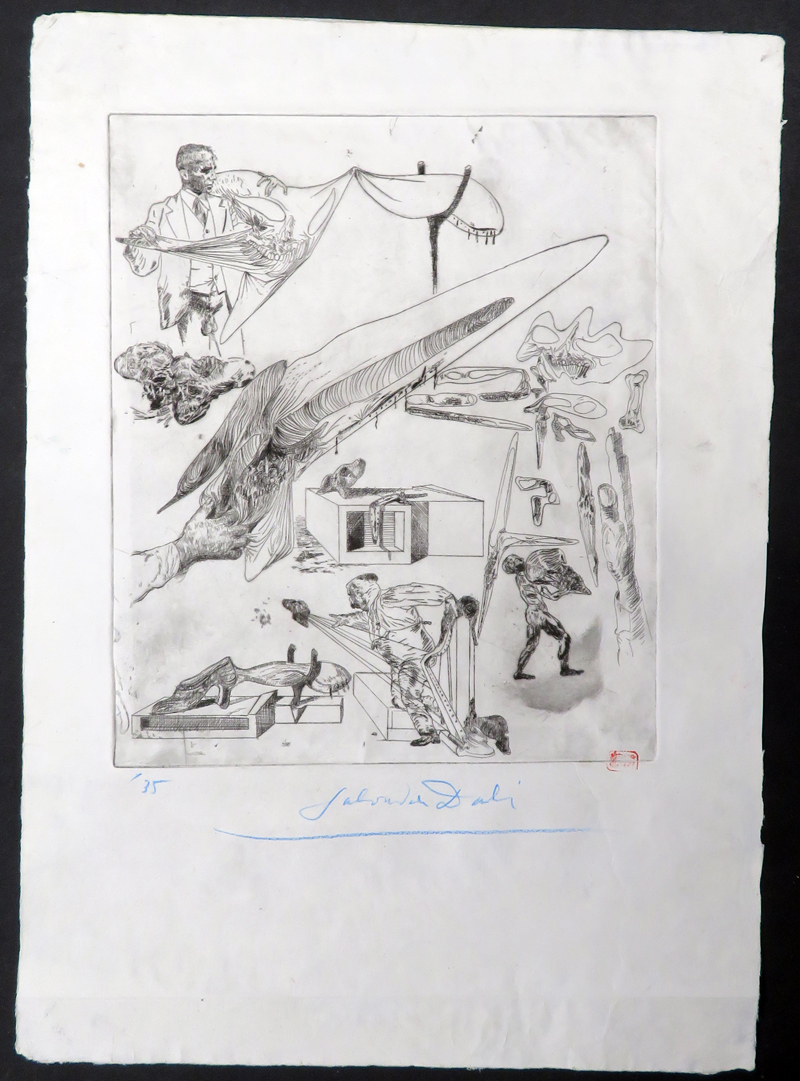 So, what was the process that was used to produce the MoMa version, or the final state. Here are some definitions:

Artist proof (A.P.). A print reserved for the artist and not included in the numbered edition, although it is identical to those prints. The total number of A.P.s is usually between 5 and 10.

B.A.T. The abbreviation for bon a tirer, a French term meaning “good for printing”. When inscribed on a print, usually in the bottom left margin, it signals that the artist is satisfied and no further changes ae needed. Professional printers subsequently use the B.A.T. example as a guide when printing the edition.

Proof. A print that is not part of the regular numbered edition., including examples printed in advance of the edition, such as “trial proofs,” that are used to assess progress on the image; “working proofs” that the artist has modified with hand additions; as well as “artist’s proofs,” and “printer’s proofs,” which are indistinguishable from the edition and reserved for the artist and printer.

Working proof. A print pulled during the evolution of the image on which the artist or printer makes hand editions, some of which may be then incorporated on the printing surface, while others serve as instructions concerning changes in color, positioning of the plate, pressure of the press, etc. 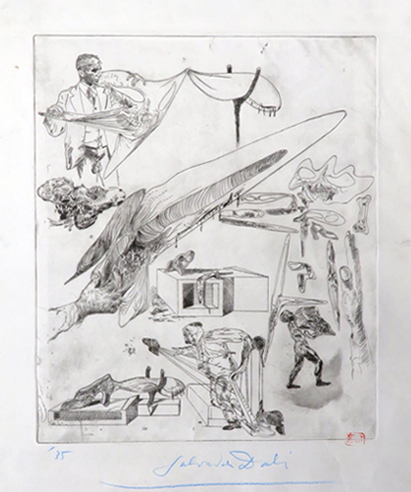 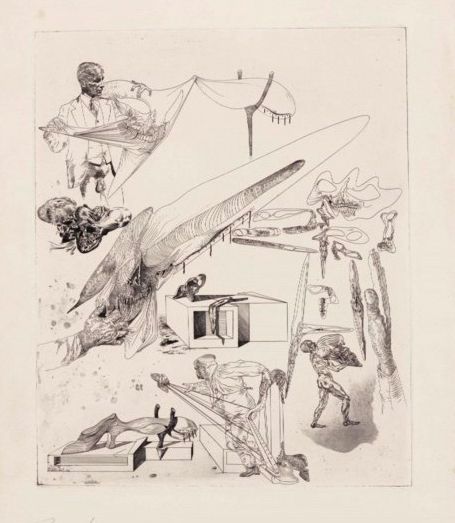 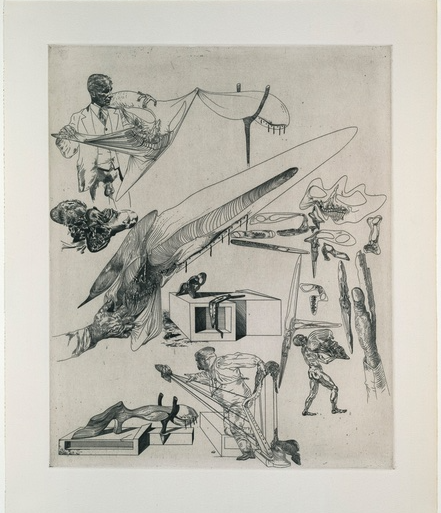 According to Wye (MoMa 2004) the work would have been executed at the workshop of Roger Lacouriere where they experimented in intaglio. The works were never published as editions. Cranian Harp was composed from an accumulation of sketches provided by Dali. Presumably, Dali would have laid out the positioning of the sketches and printed a trial proof. I can find no indication of who actually did the work on the plate. It seems unlikely that the first proof would have been the final proof, which appears to be the Christie’s version. Likely the plate was wiped and improvements were made.  Note that the Christie’s version is what is used in Michler and Lopsinger.  Thanks to Elliott King for pointing this out. 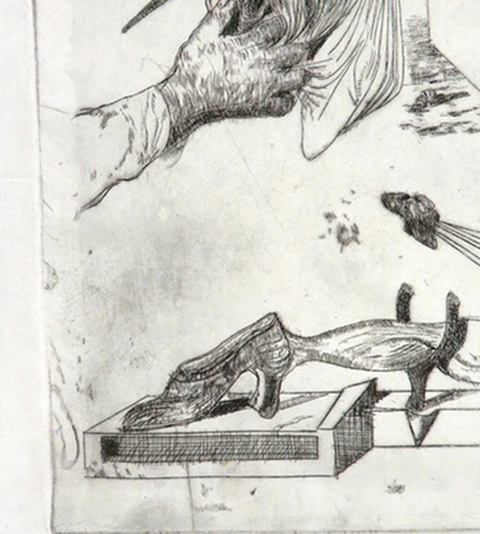 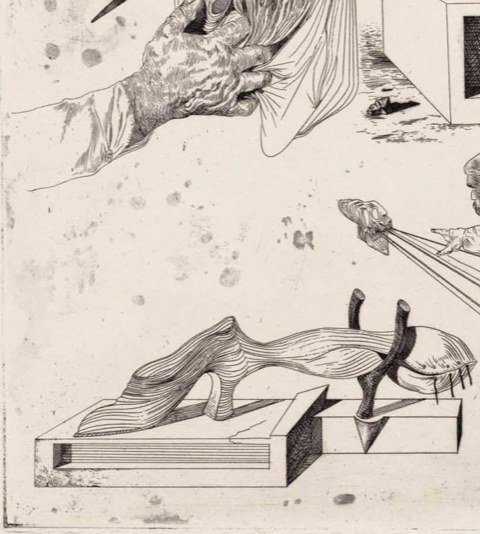 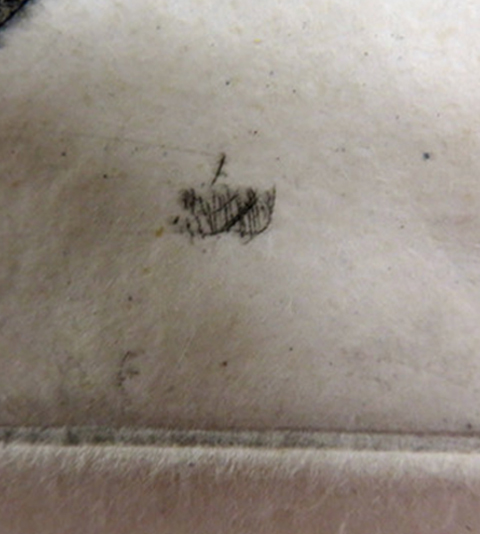 The question is is the Swann version authentic or is it printed from a second plate by a different hand.  There are Dali experts I have corresponded with who believe the Swann version is a second plate not associated with the original version. The Swann version is printed on unwatermarked paper and has all of the earmarks of other proofs I have had. The platemark is split at the bottom, there is scotch tape on the verso, the paper has a pH of about 6.2 (acidic), there is some minor creasing but the work presents well. According to www.artprice.com there have been 20 sales in the past 30 years.  9 sales were at Swanns (3 buy ins), 1 at Christie’s and the rest in Europe.  None of the sales are of the Christie’s or Swann version, so access to either version would be limited.
To reproduce the Swann version on a separate plate one would had to have had access to the Christie’s version, because of the extra markings noted above and the shading beneath the feet at the lower right are not visible on the MoMa version.  The person would then have to reproduce the markings noted above in the exact place and shape as the Christie’s version.  The person, if the goal of the reproduction was to make money, would have to sell the work.  The most likely avenue for sale would be at auction.  There has only been one auction of this work and it was a Swann, so not a lot of money is being made.  Swann said they got the work from a credible European dealer who they have worked with before.

One can question the signature and the collector’s mark.  As far a Dali’s signature goes, I suppose anything goes, but the one on the Swann version is reasonable, although it more closely matches signature from the mid 40s.  I haven’t been able to identify the collector’s mark, and it is unusual that part of it is in the image but I don’t think that in itself discredits the work. I think the Swann version is authentic.

I am not an expert on intaglio, other than having seen a lot of works by different artists. I approached this effort to document what is know about this work by looking in the literature and doing some research. If you have additional information, or come to a different conclusion, let me know and why and I will add your comments.