This is background information,

Dalí was known for his role in Surrealism. He was also a seminal example of celebrity showmanship and the cult of personality, a phenomenon that dominates popular culture today. Dali was always a colorful and flamboyant presence. This is reflected by his signature cape, wide-eyed expression and trademark upturned waxed mustache, Dalí was a master of self-promotion and spectacle. For additional background information related to Salvador Dali Vogue click on this link for more information.

This is the tirage for Vogue

According to Lopsinger, the total tirage is 226.  200 copies of the magazine contain the etching.  While 26 copies are separate.  These separate versions contain the mark epurves d’ artist.  The numbering is A – Z.  Welcome to the world of Dali.

This is information on the drypoint process.

Vogue was created using the drypoint process. In the drypoint process, Dali could sketch an idea onto a blank copper or zinc plate. He used a diamond point or another sharp tool. The incised lines would then hold and print the ink. Etching lines are typically the same width from one end to the other.

Drypoint lines vary in their width, darkness and may skip. In an early pull from the plate, the sides of the lines may exhibit the heavy, fuzzy quality created by the ink held in the burr that was pushed up along the length of the line by the diamond point. It’s much like the berm of earth pushed to the side by a farmer’s plow.  The published prints the plate.  The plate is then wiped. The burr wears down and a graphic printed later in the edition will have lost its burr. The etching looses the dark velvety quality of some of its lines. It will then look more like an etching to the untrained eye.

Etched lines end with a blunt end, not a pointed end. Pointed ends will indicate drypoints or possibly engravings. Unless there have been multiple steps in etching the plate, etched lines will be pretty much the same width and darkness over the surface of the print. Drypoint lines will vary.

Call us for more information.  The etching is Sold!!! 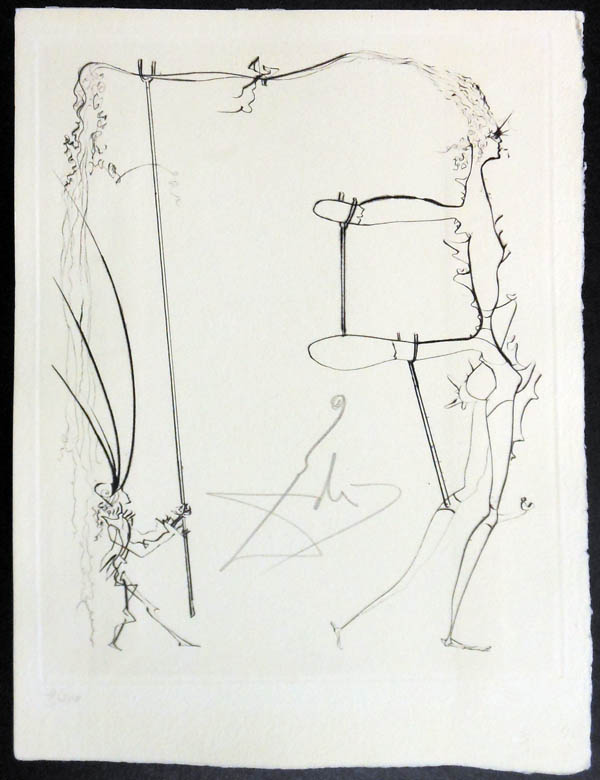