Salvador Dali San Francisco suite consists of 5 etchings, a black portfolio with title page, two pages of text and justification page. The suite was published in 1970 by Jean Schneider.   The etchings shown below are loose as issued and are numbered. The complete suite comes with the portfolio, title and justification pages. The total tirage is 235.  We also have the individual etching listed as available below. These are from a set on Auvergne and are from the editions of LXXV. The image size is about 20 3/8″ x 14 1/8″ and the full sheet is about 26 3/8″ x 20 1/8″. The edges are uneven and the sheet size is approximate.

“It was historically inevitable, this confrontation between master surrealistic and the surrealistic of American cities, this sea-grit, fog-swept, ghost-ridden, hill-peopled spit of rock and sand we call Baghdad-by-the-Bay…

San Francisco and Salvador Dali were fated to meet in artistic challenge.  Few cities in the word could put his mystical magical ee to a more stimulating test.  Here is a place where even the most earthbound imagination takes flight, a jumbled treasure house of unearthly light, racing clouds, things that go bump in the night, legends to stir even so legendary as artist as Dali.

He knows San Francisco.  Like so many who have looked upon it, he is charmed by its shifting moods, and fascinated by them.  Perhaps even mystified a little.  But Dali sees San Francisco as no one has ever seen it before, through the prisms of his unique vision.  The familiar vista are there, yet they are of another world, HIS world, transmogrified by his gifted touch into scenes that float into a hitherto unknown dimension.

He has made the city his.  It is Dali’s San Francisco.

We who can see only straight (or perhaps a little periphally) think we know what San Francisco looks like.  If we have a drop of poetry in our souls, we, too, are caught by the facile yet distinctive juxtaposition of soaring skyscraper and stooped Victorian Gothic, pagada’d Chinese tower against Catholic spire, ancient cable car crowded with miniskirted girts, pulling itself hon-over-hand across the citied hills to plunge into the past.

Salvador Dali sees all this, too, but from him tat is only a beginning.  From the textured recesses of his mind come scenes of San Francisco that begin where our own vision ends.  He takes off on psychedelic swoops that leave us far behind, trying to see the city through his own strange, dream-haunted eyes.

He looks at San Francisco from five vantage points, all familiar, all suddenly new.  The City Hall floats in filigree, light as a puff of fog.  He puts telegraph poles on Telegraph Hill – but of course! – and we wonder why we never thought of that before; it is a child-like fantasy, sophisticated as only a child’s fancy can be.

At last, San Francisco and Salvador Dali have met, the city floating tantalizingly just out of reach, as it always does, and the artist straining to capture its sparking facets before they fade into the mists.  It is a tribute for Dali that he has caught this tantalizing will-o’wisp as no artist ever has before.  It is a tribute to San Francisco that he was inspired to do so.”

Tirage from the Suite page

150 portfolios each containing 5 original etchings in color were pulled on Rives BFK paper. Each etching is signed by the artist and numbered from 1 to 150.

75 portfolios each containing 5 original etchings in color were pulled on Auvergne paper. Each etching is signed by the artist and numbered from I to LXXV.

10 portfolios each containing 5 original etchings in color were pulled on Rives BFK paper and are marked “Artist Proof.”

Available for sale are:

2) The individiual etchings as shown below.  Available

E-mail for Price and condition report. Call us for more information. 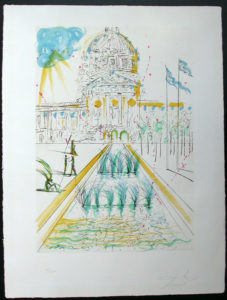 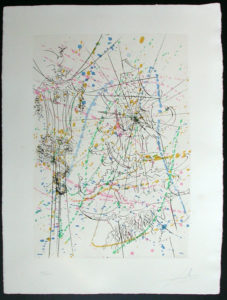 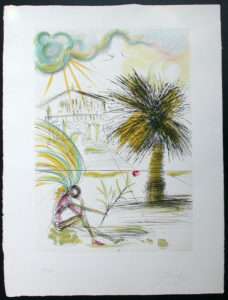 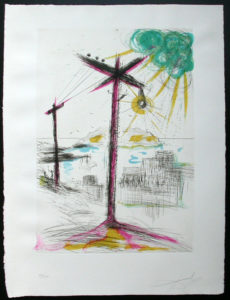 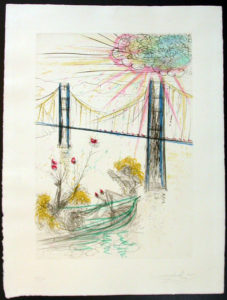