Salvador Dali Suites The Mythology Theseus and the Minotaur

Salvador Dali - The Mythology - Theseus and the Minotaur

Salvador Dali Theseus and the Minotaur

The Salvador Dali Theseus and the Minotaur etching is from The Mythology suite. Dali created the etchings between 1960 and 1964.
Dali signed each etching in the lower right. Sometimes he would add a date. For this suite, the tirage number is 43/150. It appears in the lower left. Pierre Argillet, Paris published the suite. The suite is authentic.

Call us for more information. The Theseus and the Minotaur etching is Available!!! only as part of the complete suite.

etching is Available!!! only as part of the complete suite. 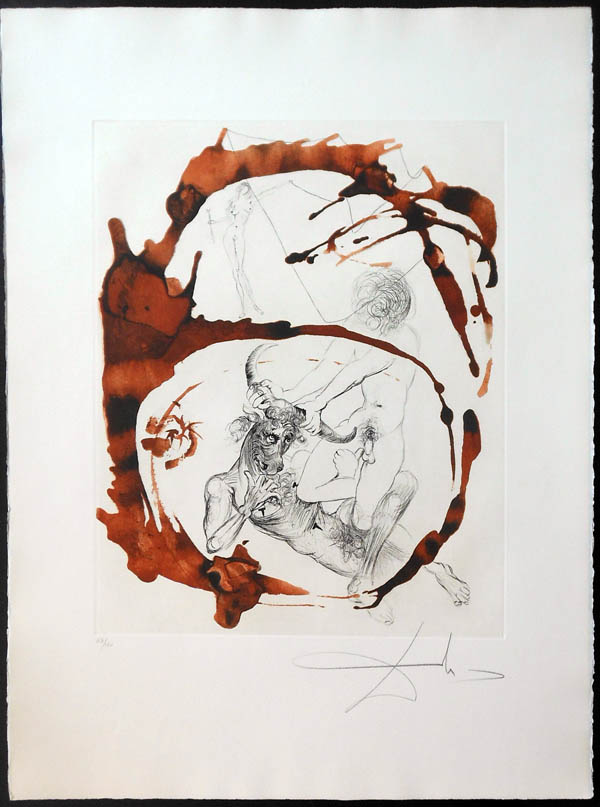 The drypoint process was used to create the Theseus and the Minotaur etching. With this process, Dali could sketch an idea onto a blank copper or zinc plate. For this, he used a diamond point or another sharp tool. The incised lines would then hold and print the ink.
Acid dissolves uncovered areas of the plate. This results in etched lines. The etched lines are typically the same width from one end to the other. Drypoint lines vary in their width, darkness and may actually be missing is some areas.