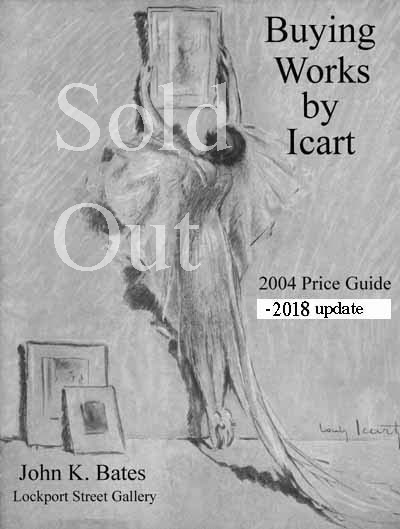 Louis Icart Etchings – How Not to Get Taken

Make sure you know the difference between an etching, a book plate, a lithograph, and an original drawing. An etching will be shown and listed as such in one of the catalogues given in the bibliography. Etchings were sold as individual works, or perhaps as part of a suite, but were sold to be hung on the wall. “Unknown” etchings that are not listed in the catalogues are periodically uncovered and the catalogues are revised to include these works. But do you really think that if 350 copies of an etching were made, you have stumbled across the one and only one left?

Illustrated books originally were not marketed in the US. They were either given to friends or sold in Europe. The common edition of a book was likely bound and contained only one set of the color illustrations. In order to display the illustrations, the books would have to be cut apart and the illustrations displayed separately. This would have been a bad use for a good book. However, this practice is now common in the US, as elaborately framed book plates are commonly sold at traveling auctions. In this circus setting, it is often difficult to know that you are buying a bookplate and not a stand-alone etching, especially since the bookplates may come with fancy certificates of authenticity.

There are good catalogues for both the books and the bookplate illustrations, but the catalogues are not complete. This is because the original documentation was incomplete [Schnessel, 1976], Holland, 2015], and the low numbered books were issued with extra sets of the illustrations. These extra sets included trial proofs (states) of the works, works containing remarques, prints in black/white and prints in sepia. Documentation of these extra sets may not have been complete at the time of printing, and documentation after distribution of the book requires actually obtaining one of only a handful of books. I have posted many of the trial proofs on www.lockportstreetgallery.com. Note also, that book illustrations are not signed. There are rare exceptions, but not enough to warrant the number of signed works that are being sold at auction.

Lithographs also generally were not marketed in the US and only partial documentation has been published [Schnessel, 1976] The lithographs were distributed mainly as advertising posters and menu covers and do not have the same style as the etchings. The posters are documented. There was also a set of lithographs published as an edition of 500 in the late 1920Õs as part of a set of works titled Dessins de Femmes. These are hand-colored with pastel and appear so much like original drawings that they have been sold as such at major auctions houses. They currently have been reproduced as Giclee prints and are sold through on-line auctions. I have documented many of these at www.lockportstreetgallery.com.

Finally, original drawings were done as preliminary sketches for etchings, for bookplates, and as commissions or gifts to friends. They are usually done on very thin, cream, tan, or off-white paper. They are loose and do not have much detail. The coloring is striking in its simplicity, with a touch here or there. The size of the sheet for the preliminary drawings or commissions is on the order of 17 x 12″. For the drawings associated with the books, there is little documentation other than what is noted on the justification pages for the books. Often, an original drawing was included with a low numbered book. For example, if a book was published with 25 illustrations, the first 25 books may have contained an original drawing. This drawing could be in watercolor or charcoal. The size approximated the size of the book pages.